Znipe partnered with ESL to deliver a next-generation viewing experience for CS:GO and DOTA fans, allowing viewers to get closer to the action than ever before with multi POVs of all the players across multiple games.

Sitting at home and watching esports simply doesn't carry the same emotions as being in the arena yourself. However, both ESL and Znipe envisioned an online experience that could attempt to bridge the gap and make fans feel closer to the action even though they might be hundreds or thousands of miles away.

Goals for the Digital Pass

An online entry ticket for fans

Starting with Katowice 2018, fans of different esports titles were able to purchase access to the Digital Pass. This would allow them to see POVs from all participating players, as well as chat with one another in a smaller environment than spammy Twitch chats. With development, production, and moderation all overseen by Znipe, ESL could continue to focus on delivering the best event possible - both for people in the arena and at home. 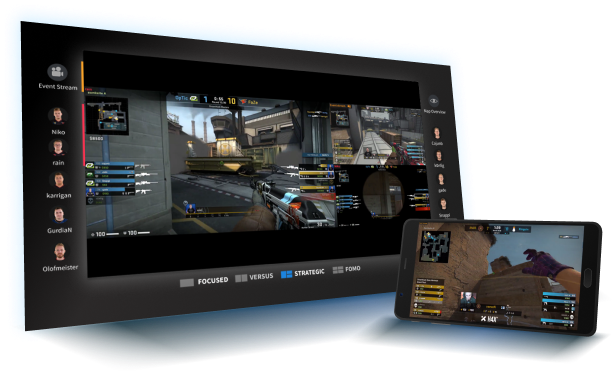 ESL recognised that especially for FPS games, POVs of the pros are a huge win.

With the event-based schedule of CSGO, one-time purchases were the way to go.

Interaction between fans in a more exclusive environment than Twitch chat.

Gunfights can get messy, so never miss the action.

How we can support you in reaching your audiences in a whole new way.