Riot games partnered with Znipe TV with a shared goal of creating a profitable esports ecosystem together. At the time (2019) League of Legends esports fans were primarily watching on other destinations, rather than on the LoL Esports domain. The strategy to both increase the numbers of viewers, and to bring them to Riot's own domain was to convert players to fans, and fans into paying consumers through an enhanced viewing experience that could only be found on Pro View.

The need for a re-birth

Pro View version 1.0 had been on the market for a year. It offered major tournaments and events with multi POV of the pros and accompanying stats. However, the stats were exactly the same as what was currently being offered for free on LoL Esports. To create a willingness to pay, the overall experience required a fundamental redesign. Together, Riot Games and Znipe designed and developed a new product for fans, internally dubbed Pro View 2.0.

Releasing Pro View to the fans

Throughout 2020 and 2021, Znipe developed a new platform for Pro View that emphasised content discovery in a way that was not previously available in esports. Additionally, we made improvements to the video player and ensured that the product was available and functioning on all devices, from mobile over tablet to desktop.So on June 4th 2021, it was finally time to release Pro View to the public (again). Over the next 5 months, Riot Games made more content available on the platform, going beyond just the player POVs to include exclusive editorial content. We ended the competitive year on a high note with Worlds 2021 ushering in a huge amount of new users and subscribers to the platform. 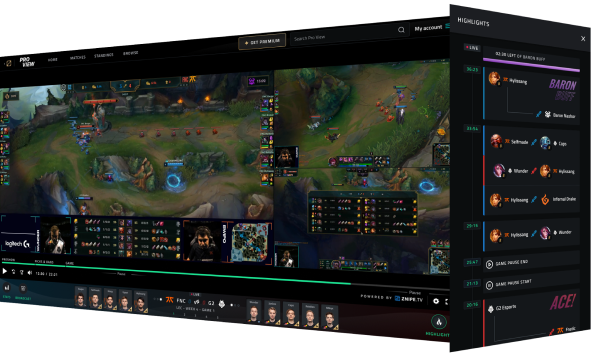 All 10 player's POVs, the map stream, and the event broadcast were synced in the video player.

In game stats were presented in the sidebar and were synced against the streams.

Riot Games opted for a freemium model with the newly built Pro View.

A big focus was put on discoverability of content based on your favourite pros.

We kept track of all the action during messy team fights.

How we can support you in reaching your audiences in a whole new way.